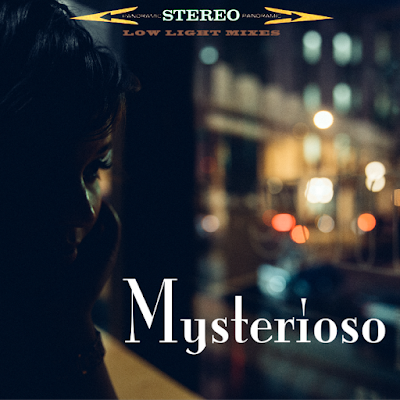 I'm not sure where this mix began.  Possibly late at night, glass of whiskey on the table, slow jazz playing in the background.  Arve Henriksen probably came up & got me thinking about dark, atmospheric jazz.  Which sends me to Spotify to investigate more jazz noir, which leads to the discovery of Shadowdream & Dead Combo, which leads to a new mix.

As you've probably guessed by now this is a late night, atmospheric jazz set.  I knew when I started this mix that I'd have to include something from the Twin Peaks soundtrack because that is the first thing I think of when contemplating noir jazz.  The Angelo Badalamenti & David Lynch cut that I picked works nicely because also used it for the title of the mix.

I really like the mood and feel of this entire mix and I hope you do too.  Grab a scotch and give it a spin in the dark.

and it's dark and it's raining,

and you're on the edge of the city

and you've been driving all night.

And you took a turn back there

but you're not sure it was the right turn.

But you took the turn anyway,

just kept going in that direction.

And somehow it looks sort of familiar,

so you just keep driving.

Can you tell me where I am?

You've been on this road before.

You can read the signs.

You can feel your way.

You can do this in your sleep.

This is a mix I did for the good folks at Intergalactic.FM.  Head over there for this and a ton of other mixes and radio shows.

Like most of my mixes there is a starting point or inspiration that gets the ball rolling.  In this case it was the Laurie Anderson track "Lighting Out For The Territories" from her United States Live album.  The cut is so atmospheric and moody.  It immediately conjures up images of lonely highways, lonely songs and tires thumping on the pavement.

I had a hard time deciding between cuts that have a lonely country, twangy feel and songs that are more pulsating, driving electronic in nature.  In the end I ended up with a little bit of everything.  The two tracks with vocals definitely have a lonely, plaintive quality.  That same feel is also present in the Daniel Lanois tunes and the instrumental from The Antlers(whose new album is fantastic by the way).

The tracks from Prins Thomas and Brian Reitzell are of the more electronic driving type.  Both have an old kraut rock feel to them that I love.  A totally different feel is found in pieces by Terminal Sound System and Talvihorros, sort of weird Twins Peaks vibe.  Which makes sense because the Talvihorros track is actually the Twin Peaks theme.  Most of the rest of the tunes just sort of felt right for a theme of night driving.

Laurie Anderson makes 4 or 5 appearances in the mix.  All are variations of the opening track. Usually with other rhythms or road sounds added in.

The title of this mix pretty much says it all.  This is a collection of tunes that works well at night.

I didn't want the mix to be dark & depressing or dark and scary, just something that feels more at home at night.  It's sort of the opposite of the Sunday morning mixes.  Although a few tunes could go either way.

I didn't start out making a "night" mix, it just sort of happened on it's own after the first few cuts.  The mix opens with a fantastic remix of Bowie's Sound & Vision.  This cut isn't necessarily a "night" tune but I just had to use it.  The next three cuts are what took the mix in the nightside direction.