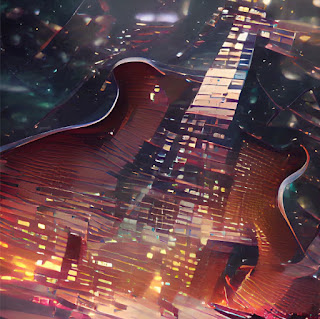 Seven years ago I did a mix called "Space Rock" that is unique in the Low Light Mixes catalog. It's a collection of instrumental tunes that are guitar driven and are a bit spacey, a little prog rock, and with some post-rock tossed in as well. You can find to original mix here: http://lowlightmixes.blogspot.com/2015/04/space-rock.html

I've always wanted to do a follow-up mix but never got around to until now. So here is "Fractal Panorama - Guitar Space Rock". It's a set of new and old instrumentals with the same vibe as the first mix. I was happy to have dug up some really old cuts from 1972, '73 & '74. I was especially psyched to have stumbled on the Richard Pinhas homage to Robert Fripp with the track "In the Wake of King Fripp" from 1974. But my favorite cut in the mix is "Slowburn" by Sonar With David Torn. It's got this great, slightly menacing vibe to it.