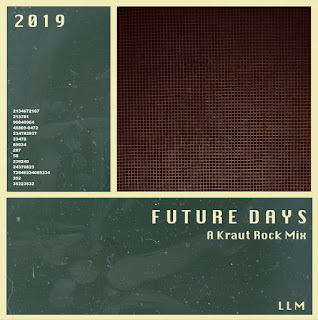 As is usually the case with these mixes, one song sets me on the path towards a new collection. In this case it was the song T by Dan Lissvik.

It keep popping up on a few of my playlists and I always thought it had kind of kraut rock feel to it. I realized that I've never made a kraut rock mix and that needs to be rectified.

I don't want to get into a debate about what is and isn't kraut rock. There are tracks from kraut rock classics like Neu! and Can. But there are also three cuts from new artists like Dan Lissvik, Sankt Otten and Kilchhofer. Those new tunes are in there because I thought they fit with the kraut rock vibe.

The rest of the mix contains artists like Cluster, Ashra, Popol Vuh, Holger Czukay, Conrad Schnitzler, Bernard Szajner and Gunter Schickert. I'm exactly sure which ones would qualify as kraut rock but I think they're all close enough.