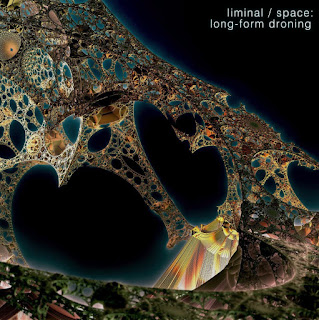 You know how when you see a certain director is involved with a film, like Christopher Nolan, you just know it'll be interesting. Or how music released on certain labels, such as 12k, will definitely be worth exploring. Well, that's how I feel when the tag "Curated by Paul Asbury Seaman" is attached to a mix.

Paul & I have collaborated on several mixes and all have been excellent. It's only Feb. 10th and already we've been treated to two of Paul's mixes. This one is a bit of a departure for him, using pieces that are, like the title says, long-form drones. For me droning ambient can be very hit & miss. This mix is definitely a hit.

Here's what Paul says about it:

“Most of us have contemplated the seemingly contradictory opposites that are a fundamental aspect of reality: good and evil, joy and pain, love and hate, our inner world and infinite space. But this ying/yang, male/female, fire/water dichotomy obscures the fact that much of life is lived in the in-between, in the places where light and dark overlap. Perhaps one reason so many people find calm and inspiration at the beach is its liminal quality—between the ocean and the land. In this mix I give you 71 minutes in that mysterious clarity between trance and tranquility.”