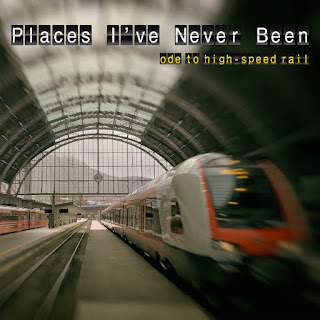 Everything about trains is evocative. The sound of the whistle, the rhythm of the tracks, the sounds of the station, etc. Trains make for a perfect theme in electronic music mixes. Which is why you're bound to hear several of them this year from Low Light mixes.

This first one comes to us from my frequent collaborator, Paul Asbury Seaman. Not only has Paul done previous excellent mixes for me, he's also done a couple train mixes. Here's what he has to say about his latest creation...

“In my last mix I celebrated “liminal space,” the long in-betweens of life. Travel by train is both metaphor and literally that. Beyond the excitement of the busy station and going someplace new, for many of us the journey is the destination: the experience as both overview and connectedness, not felt from an airplane. The impetus for this mix was the just-released debut album of d’Voxx, on Ian Boddy’s UK label, DiN. And I dedicate it to the EuroPass, which ever since the 1960s has enabled vacationers and tourists from around the world to travel at highly-discounted rates—including by high-speed rail—anywhere in the 30 countries that are part of the system. Something that in the United States is, for now, only an ambient dream.”

The mix changes gears for the last tune, using sax, acoustics instruments and vocals but Paul thought it would fit well because A) it's called Train and B) it has "the dead-tired but satisfied feeling you have when you get home to your own bed after a long trip."